To the rescue of the Taricaya turtles!

For Taricaya turtles (Podocnemis unifilis), the month of August corresponds to the laying period. This is a time that is eagerly awaited by the communities who collect them for self-consumption or sale…sometimes excessively so. For several years now, we have observed a drop in populations, a clear enough message for the park rangers of the concession who have deployed 3 artificial beaches this year to accommodate about ten nests. We are impatiently waiting for the hatching of these 400 small protected birds so that they can be released in their original nesting site. To complete this initiative, the park rangers are involved in raising awareness among local residents and schools in order to encourage a sustainable change in practices. 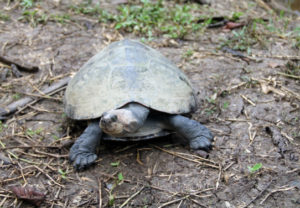 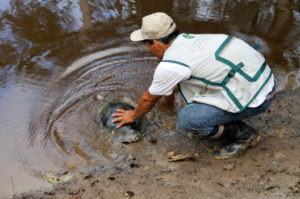 Anecdote from the field

“It was about 5 o’clock in the afternoon, Ivan was sitting on the hill, a few meters from the gatehouse (Yanayacu) looking at the river and he saw someone passing by in a boat that was probably going to Juancito. They greeted each other and suddenly he saw that the person stopped his engine and prepared his gun, the ranger asked him, “what are you doing? The person tells him that there is a tiger about 30 meters away from Ivan, it is assumed that the tiger was going to drink water but Ivan could not see it, it went into the forest before being shot. The boatman was surprised to see that Ivan did not run to hide and said, “you are not afraid, you do not kill him? “To which the ranger replied, “we protect the tigers here“. Extracto del diario de Lotty Morey